ProveMyFloridaCase.com > Appeal  > The Burden to Establish Petitions for Writs of Certiorari (“Cert”)
0 Comments

The Burden to Establish Petitions for Writs of Certiorari (“Cert”) 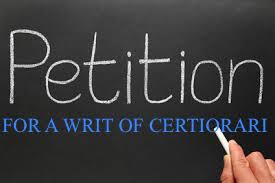 What is a petition for a writ of certiorari (or “cert,” for short)? A petition for a writ of cert is when a petitioner wants to appeal a non-final order (e.g., an interlocutory order that does not finally dispose of the dispute such as a final adverse judgment against the petitioner) issued by the trial court when there is no direct right to appeal that non-final order.

In order for an appellate court to entertain a petition for a writ of cert, the petitioner MUST establish that (a) the trial court departed from the essential requirements of the law and (b) this departure caused irreparable injury to the petitioner that cannot be remedied by a later appeal from a final judgment against the petitioner.   See Belair v. Drew, 770 So.2d 1164, 1166 (Fla. 2000). This is a challenging burden or appellate standard of review for a petitioner to overcome which is why many petitions for writs of cert are denied by appellate courts. Indeed, the Florida Supreme Court explained:

“[C]ertiorari is an extraordinary remedy that should not be used to circumvent the interlocutory appeal rule which authorizes appeal from only a few types of non-final orders. For an appellate court to review a nonfinal order by petition for certiorari, the petitioner must demonstrate that the trial court departed from the essential requirements of the law, thereby causing irreparable injury which cannot be adequately remedied on appeal following final judgment.”