Verdict Forms (General or Special) and the Two-Issue Rule 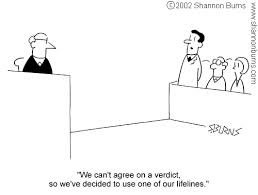 Now, I want to discuss the importance of the verdict form. This is the form the jury fills out during its deliberation that identifies the associated liability and damages it determines.

The trial judge has discretion to determine the type of verdict form that is submitted to the jury. See Walsh v. Diaz, 409 So.2d 1186 (Fla. 4th DCA 1982). Thus, the standard of appellate review is abuse of discretion and absent prejudicial or reversible error, the verdict form given to the jurors will not overturn the verdict. See Triana v. Fl-Shock, Inc., 763 So.2d 454 (Fla. 3d DCA 2000).  Notably, in a complex civil case with multiple defendants and multiple theories of liabilities against the defendants, the Fifth District Court of Appeal held it was reversible error to submit a general verdict form to the jury when the defendants objected to the use of that form. See Derrick v. Clemons, 576 So.2d 939 (Fla. 5th DCA 1991).

There is also an important appellate doctrine known as the two-issue rule when it comes to verdict forms that finds, “where there is no proper objection to the use of a general verdict, reversal is improper where no error is found as to one of two issues submitted to the jury [one of which could be determinative of the case] on the basis that the appellant is unable to establish that he has been prejudiced.” See Whitman, 383 So.2d at 619.   The reason this rule applies is because if more than one issue is submitted to the jury and either issue could be determinative of the case, the general verdict form makes it impossible for an appellate court to determine which issue formed the basis of the jury’s verdict. See Food Lion, L.L.C. v. Henderson, 895 So.2d 1207 (Fla. 5th DCA 2005).

In another example, let’s say a plaintiff sued a defendant for breach of contract. The case proceeded to trial and a general verdict form was agreed on by the parties and used. The jury returned a verdict in favor of the defendant. The plaintiff appealed and argued that the trial court erred in instructing the jury on one of the defendant’s affirmative defenses. But, because of the general verdict form, it was uncertain whether the jury ruled in favor of the defendant on this defense or other affirmative defenses raised by the defendant for the jury’s consideration (that would be determinative of the case). Thus, under the two-issue rule, there could be no reversal where “no error is found as to one of the issues that can independently support the jury’s verdict.” See Barth v. Khubani, 748 So.2d 260 (Fla. 1999).