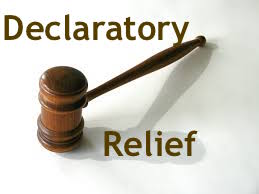 Sometimes a party pursues what is known as an action for declaratory relief or declaratory judgment– for a trial court to declare their rights with respect to the application of a written document or instrument. In this manner, Florida Statute s. 86.021 states:

It has long been held that with respect to actions for declaratory relief:

Before any proceeding for declaratory relief should be entertained it should be clearly made to appear that there is a bona fide, actual, present practical need for the declaration; that the declaration should deal with a present, ascertained or ascertainable state of facts or present controversy as to a state of facts; that some immunity, power, privilege or right of the complaining party is dependent upon the facts or the law applicable to the facts; that there is some person or persons who have, or reasonably may have an actual, present, adverse and antagonistic interest in the subject matter, either in fact or law; that the antagonistic and adverse interests are all before the court by proper process or class representation and that the relief sought is not merely the giving of legal advice by the courts or the answer to questions propounded from curiosity.

Courts, however, are not going to render an advisory opinion about a future possibility of a legal injury because this means there is NOT a present injury at the time the declaration is being sought. See Apthorp v. Detzner, 162 So.3d 236 (Fla. 1st DCA 2015). Thus, it is imperative that there is a “bona fide, actual, present practical need for the declaration” dealing with the application of an actual fact pattern and these allegations should be included in the lawsuit seeking declaratory relief. See Ahearn, 180 So.3d at 174.

The circuit and county courts have jurisdiction within their respective jurisdictional amounts to declare rights, status, and other equitable or legal relations whether or not further relief is or could be claimed. No action or procedure is open to objection on the ground that a declaratory judgment is demanded. The court’s declaration may be either affirmative or negative in form and effect and such declaration has the force and effect of a final judgment.