Election of Remedies PRIOR to Final Judgment 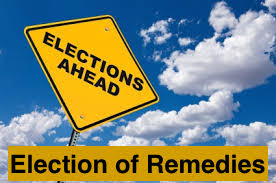 Oftentimes, a plaintiff will plead alternative claims or theories of liability against a defendant(s).   Pleading in the alternative is allowed under Florida Rule of Civil Procedure 1.110(g).   The plaintiff is entitled to elect–between two mutually exclusive (alternative) remedies–the remedy it prefers any time prior to the entry of final judgment. See Liddle v. A.F. Dozer, Inc., 777 So.2d 421 (Fla. 4th DCA 2001); see also  Burr v. Norris, 667 So.2d 424, 426 (Fla. 2d DCA 1996) (“Plaintiffs are also allowed to plead inconsistent or alternative actions and need only elect remedies before final judgment.”) This allows the plaintiff to present alternative and mutually exclusive theories to the jury selecting the remedy it prefers prior to the court entering final judgment based on the jury’s verdict. This is certainly a benefit to a plaintiff that is not punished from presenting such alternative theories–the plaintiff is just precluded from the windfall of a double recovery.

For example, in Liddle, the plaintiff moved to foreclose a construction lien and, alternatively, moved to foreclose an equitable lien based on unjust enrichment. The plaintiff could not recover on both because if it did it would allow the plaintiff to engage in a double recovery. After the close of all of the evidence in the jury trial and prior to closing argument, the defendants wanted the court to order the plaintiff to elect a remedy: either foreclosing the construction lien or the equitable lien. The trial court did not rule and ultimately entered judgment against the defendants on both theories of recovery.   The Fourth District held:

Here, Dozer [plaintiff] sought the same relief under two mutually exclusive remedies. The trial court entered judgment in favor of Dozer on its claim to foreclose its statutory mechanic’s lien and entered judgment in favor of Dozer on its claim for foreclosure on an equitable lien based on unjust enrichment for the same amount. Since Dozer proceeded under mutually exclusive remedies and the final judgment allows for double recovery under both theories, the trial court erred in not requiring an election of remedies prior to entry of the final judgment. Because Dozer is in a “win/win” situation under either theory, we affirm Dozer’s entitlement to recovery but remand for election of a remedy and entry of final judgment solely upon that remedy.

In another example, Levitt-ANSCA Towne Park Partnership v. Smith & Co., Inc., 873 So.2d 392 (Fla. 4th DCA 2004), a contractor sued a developer for breach of contract and unjust enrichment for work the contractor performed outside the contract. The jury returned a verdict in favor of the contractor that included damages under both theories. The Fourth District held: