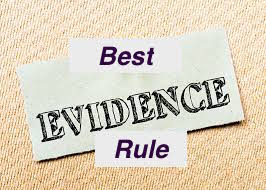 A duplicate is admissible to the same extent as an original, unless:

(1) The document or writing is a negotiable instrument as defined in s. 673.1041, a security as defined in s. 678.1021, or any other writing that evidences a right to the payment of money, is not itself a security agreement or lease, and is of a type that is transferred by delivery in the ordinary course of business with any necessary endorsement or assignment.

(2) A genuine question is raised about the authenticity of the original or any other document or writing.

(3) It is unfair, under the circumstance, to admit the duplicate in lieu of the original.

The original of a writing, recording, or photograph is not required, except as provided in s. 90.953, and other evidence of its contents is admissible when:

(2) An original cannot be obtained in this state by any judicial process or procedure.

(3) An original was under the control of the party against whom offered at a time when that party was put on notice by the pleadings or by written notice from the adverse party that the contents of such original would be subject to proof at the hearing, and such original is not produced at the hearing.

(4) The writing, recording, or photograph is not related to a controlling issue.

For example, in Sun Bank of St. Lucie County v. Oliver, 403 So.2d 583, 583-84 (Fla. 4th DCA 1981), a bookkeeper testified regarding her company’s deposit slips, books, and records without introducing such documents into evidence. The appellate found that this testimony violated the best evidence rule: “The best evidence in the instant case would be the company records and only after their admission would Ms. Rogers’ [bookkeeper] testimony as to her findings be proper.”.

In another example, T.D.W. v. State, 137 So.3d 574 (Fla. 4th DCA 2014), a detective described the contents of what she viewed on a surveillance videotape. The detective’s testimony was offered to prove the truth of the contents of the video. The video was not introduced at trial. The appellate court held the detective’s testimony violated the best evidence rule: “Typically, useful surveillance video shows the commission of a crime; when offered to prove the crime without introduction of the video in evidence, a witness’s in-court description of the actions depicted on the video is content-based testimony that violates the best evidence rule.” T.D.W., 137 So.3d at 576.  But, in J.J. v. State, 170 So.3d 861 (Fla. 3d DCA 2015), the appellate court held that if a fact witness observed live events that were also recorded by video, the witness can describe the events even if the video is not admitted into evidence without violating the best evidence rule.