ProveMyFloridaCase.com > Appeal  > I Lost the Appeal. Should I File an Appellate Motion for Rehearing???
0 Comments

I Lost the Appeal. Should I File an Appellate Motion for Rehearing??? 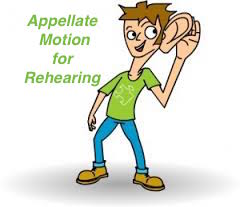 If you find the top Florida appellate attorney, the chances of you losing an appeal will be slim. However, there are times when appeals lose. In these situations, people often find themselves lost and unsure what to do next. Do they file an appellate motion for rehearing?

Florida Rule of Appellate Procedure 9.330(a) states in pertinent part:

“A motion for rehearing…a written opinion may be filed within 15 days of an order or within such other time set by the court. A motion for rehearing shall state with particularity the points of law or fact that, in the opinion of the movant, the court has overlooked or misapprehended in its decision, and shall not present issues not previously raised in the proceeding….A response may be served within 10 days of service of the motion.”

Then what are motions for rehearing really for? As set forth in the above rule, these motions are for raising “points of law or fact that…the court has overlooked or misapprehended.”

“Motions for rehearing are strictly limited to calling our attention-without argument-to something we have obviously overlooked or misapprehended. The motion for rehearing is not a vehicle for counsel or the party to continue its attempts at advocacy. It should be demonstrative only-i.e. merely point to the overlooked or misunderstood fact or circumstance. If we want additional argument, we know how to say so.”

What if the court does not issue a written opinion and instead issues a per curiam affirmance (known as a PCA) without opinion? In other words, how could the court overlook something if it doesn’t issue a written opinion? Generally, they cannot. In this instance, motions for rehearing “are [very] rare and are most often limited to occasions when a relevant decision of the Supreme Court or another District Court of Appeal is rendered after briefing and oral argument and not considered by the court.”

Now, even more rare is a motion for rehearing en banc pursuant to Florida Rule of Appellate Procedure 9.331. “A party may move for an en banc rehearing [of all the district court of appeal’s judges in regular active service] solely on the grounds that the case or issue is of exceptional importance or that such consideration is necessary to maintain uniformity in the court’s decisions.” Fla.R.App.P. 9.331(d)(1).