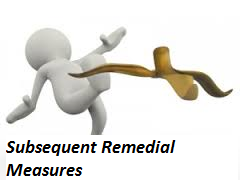 Evidence of measures taken after an injury or harm caused by an event, which measures if taken before the event would have made injury or harm less likely to occur, is not admissible to prove negligence, the existence of a product defect, or culpable conduct in connection with the event. This rule does not require the exclusion of evidence of subsequent remedial measures when offered for another purpose, such as proving ownership, control, or the feasibility of precautionary measures, if controverted, or impeachment.

For example, in Harris v. Florida Power & Light Co., 700 So.2d 1240 (Fla. 3d DCA 1997), a person died from being electrocuted from an uninsulated power line. The plaintiff argued that overgrown trees had been pushed into the power line by a crane causing electrical current to run from the trees to the crane and then to the truck the deceased was leaning against. Upon learning of the accident, FP&L had the overgrown trees located at the accident scene trimmed. At trial, the plaintiff argued that FP&L was required to cut trees away from the power line which FP&L disputed. FP&L contended that the deceased was electrocuted when the crane came into contact with the power line that caused the electrical current to travel from the crane to the truck that the deceased was leaning against. During trial, the plaintiff tried to introduce evidence of FP&L cutting the overgrown trees immediately after the accident. The trial court correctly deemed this evidence as an inadmissible subsequent remedial measure that the plaintiff only wanted to introduce in order to prove that FP&L was negligent by not trimming the trees sooner.

Conversely, in Daharan Well Texaco Oil Co. v. McFadden, 717 So.2d 162 (Fla. 3d DCA 1998), the defendant in a slip and fall lawsuit appealed because the trial judge deemed admissible a photograph of the slip and fall location after the plaintiff’s fall. When it comes to cases like this, you need evidence to be able to back up your story. You may not be thinking about this at the time, but when the time comes where you decide to get in touch with a chicago slip and fall accident lawyer (if you reside here), then this will be vital information.
The defendant argued that the photograph should have been deemed inadmissible because it depicted a subsequent remedial measure. The appellate court affirmed the trial court finding that the photograph was properly admissible under the impeachment evidence exception to subsequent remedial measures. See, e.g., Morowitz v. Vistaview Apartments, Ltd., 613 So.2d 493 (Fla. 3d DCA 1993) (newsletter distributed to tenants that said don’t get on elevators in wet bathing suits as floors are slippery after a slip and fall accident at apartment building should have been admissible impeachment evidence to impeach defendant’s employees that said they were unaware of notices given to tenants of slippery floors).