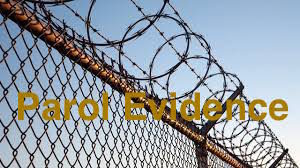 Remember, if you enter into an agreement, there is a strong chance the agreement will be clear and parol evidence will NOT be allowed to demonstrate the parties’ intent or meaning of the document. This reinforces the importance of ensuring the agreement you enter is clear and reflects your intent.  Further, if a crafty party tries to introduce parol evidence to establish such intent, it is important to OBJECT to the introduction of the parol evidence to preserve this issue for appeal. King, 867 So.2d at 1226.