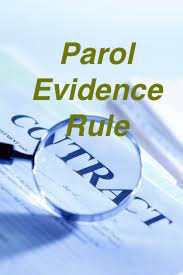 The parol evidence rule is not an evidentiary rule, but a substantive rule of law. Madsen, Sapp, Mena, Rodriguez & Co., P.A. v. Palm Beach Holdings, Inc., 899 So.2d 435, 436 (Fla. 4th DCA 2005). It is an important substantive rule of law when it comes to cases that involve the rights, liabilities, and remedies of parties pursuant to a written agreement.

The parol evidence rule precludes the admissibility of extrinsic “verbal agreements [evidence] between the parties to a written contract which are made before or at the time of execution of the contract.” Pavolini v. Williams, 915 So.2d 251, 254 (Fla. 5th DCA 2005). It does not bar the admissibility of verbal / oral agreements made after the execution of the written contract “that alter, modify, or change the former existing agreement between the parties.” Id.; accord J. Lynn Const., Inc. v. Fairways at Boca Golf & Tennis Condominium Ass’n, Inc., 962 So.2d 928 (Fla. 4th DCA 2007).

In other words, parol or extrinsic evidence as to what the parties purportedly agreed to BEFORE or AT THE TIME a contract was entered into is inadmissible to interpret the parties’ contract. “Parol evidence is inadmissible to contradict, vary, or modify terms which are unambiguously contained within a written agreement.” Prime Homes, Inc. v. Pine Lake, LLC, 84 So.3d 1147, 1152 (Fla. 4th DCA 2012).  The reason being is that if a contract is unambiguous, there is no reason for extrinsic evidence to aid in the interpretation of that contract—“[t]he operation of the parol evidence rule encourages parties to embody their complete agreement in a written contract and fosters reliance upon the written contract.” Jenkins v. Eckerd Corp., 913 So.2d 43, 53 (Fla. 1st DCA 2005).

There are exceptions to the parol evidence rule.   For instance, if a contract contains a latent ambiguity, extrinsic evidence may be admissible in furtherance of interpreting the contract properly. See Fi-Evergreen Woods, LLC v. Robinson, 135 So.3d 331, 336 (Fla. 5th DCA 2013). A latent ambiguity in a contract is not clear from the face of the contract but becomes clear through extrinsic evidence where contractual language is reasonably interpreted in two or more possible ways. Prime Homes, Inc., 84 So.3d at 1152. “A latent ambiguity arises when a contract on its face appears clear and unambiguous, but fails to specify the rights or duties of the parties in certain situations.” Jenkins, 913 So.2d at 52-53