Proving Your Case Through Circumstantial Evidence 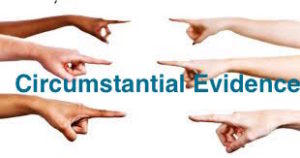 The plaintiff puts on her case through circumstantial evidence so that inferences can be drawn from that evidence.  The defendant moves for a directed verdict after the plaintiff put on her case through circumstantial evidence. The trial court denies the motion and the jury enters a verdict in favor of the plaintiff. The defendant appeals the trial court’s denial of the motion for a directed verdict. The standard of review for the denial of a motion for directed verdict is de novo.   Broward Executive Builders, Inc. v. Zota, 41 Fla.L.Weekly D1126a (Fla. 4th DCA 2016).

In Broward Executive Builders, the plaintiff, a painter, fell and seriously injured herself. No one witnessed the fall and the plaintiff was unable to testify. The plaintiff claimed that defendant general contractor caused her fall by failing to install required guardrails that would have prevented the fall.

[A plaintiff] must introduce evidence which affords a reasonable basis for the conclusion that it is more likely than not that the conduct of the defendant was a substantial factor in bringing about the result. A mere possibility of such causation is not enough; and when the matter remains one of pure speculation or conjecture, or the probabilities are at best evenly balanced, it becomes the duty of the court to direct a verdict for the defendant.

[B]ecause there is no evidence of how she fell or where exactly she fell from, it would be complete speculation and conjecture for any trier of fact to conclude that the lack of guardrails contributed to causing her injuries. The burden of proof rested upon appellees [plaintiff] to prove appellant’s [defendant] negligence. Where there is evidence that the harm could have occurred even in the absence of the appellant’s conduct, proof of causation cannot be based on mere speculation, conjecture, or inferences drawn from other non-exclusive inferences.

Broward Executive Builders, supra (reversing the trial court and remanding for judgment to be entered in favor of defendant general contractor).