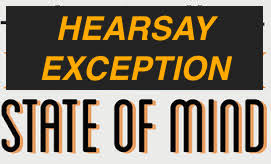 (a) A statement of the declarant’s then-existing state of mind, emotion, or physical sensation, including a statement of intent, plan, motive, design, mental feeling, pain, or bodily health, [is an exception to hearsay] when such evidence is offered to:

For example, in a medical malpractice action, a CT Scan interpreted by a radiologist revealed an aortic tear (Type I dissection) that needed to be repaired. A test was conducted by a cardiologist to determine the extent and precise location of the tear and the patient died during or immediately after the test. The plaintiff (estate) argued that the test performed caused another tear and this tear caused the patient’s death. During trial, and over the objection of the plaintiff, the cardiologist testified that he was told by the radiologist (the declarant) that read the CT Scan of the aortic tear (Type I dissection). The plaintiff argued that this constituted hearsay since what the radiologist told the cardiologist was an out-of-court statement. The appellate court held that this did not constitute inadmissible hearsay because the out-of-court statement was not offered to prove the truth of the matter asserted, but simply to prove that the cardiologist had notice of the aortic tear (Type I dissection).   See Dorsey v. Reddy, 931 So.2d 259 (Fla. 5th DCA 2006).