ProveMyFloridaCase.com > Evidence  > Motion for Directed Verdict (or to Set Aside the Verdict) is an Important Trial Consideration
0 Comments

Posted by David Adelstein
in Evidence, Standard of Review 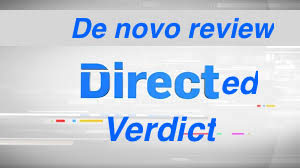 An appellate court must review a trial court’s determination on a motion for judgment notwithstanding the verdict de novo and “evaluate the evidence in the light most favorable to the non-moving party, drawing every reasonable inference flowing from the evidence in the non-moving party’s favor.” Miami-Dade Cnty. v. Eghbal, 54 So. 3d 525, 526 (Fla. 3d DCA 2011). Additionally, we must sustain a jury verdict if it is supported by competent substantial evidence. Hancock v. Schorr, 941 So. 2d 409, 412 (Fla. 4th DCA 2006).

In other words, the appellate court will evaluate the evidence in favor of the non-moving plaintiff (part that did not move for the directed verdict) drawing reasonable inferences in its favor. If there was competent substantial evidence supporting the jury’s verdict, the court will affirm the judgment in favor of the plaintiff.