The Certiorari Standard of Review 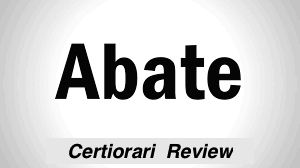 I previously talked about petitions for writs of certiorari and the certiorari standard of review. A recent Florida Fourth District Court of Appeals explained: “Certiorari review is appropriate when an order [from the trial court] departs from the essential requirements of law, causing material injury throughout the remainder of proceedings below and effectively leaving no adequate remedy on post-judgment appeal.” Robinson v. Florida Peninsula Insurance Co., 40 Fla.L.Weekly D2547b (Fla. 4th DCA 2015).