ProveMyFloridaCase.com > Evidence  > Admissions Against Party Opponent (Hearsay Exception) Does Not Need to be Based on Party’s Personal Knowledge
0 Comments 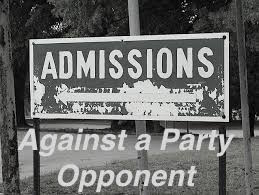 An admission against a party opponent is an important exception to the hearsay rule. I previously discussed this hearsay exception in detail because it is an exception that routinely applies in order to admit testimony / evidence at trial.

Recently, the case of Jones v. Alayon, 2015 WL 1545005 (Fla. 4th DCA 2015) discussed the applicability of this exception. This case was a wrongful death action brought by the decedent’s daughter as personal representative of the estate stemming from an automobile accident caused by an off-duty police officer that originally fled the scene of the accident. The jury awarded the plaintiff less damages than the plaintiff desired and the plaintiff appealed. One issue, amongst others, that the plaintiff argued on appeal was that the trial court abused its discretion by allowing hearsay evidence to come in that the decedent’s current wife spent decedent’s money on drugs and alcohol, there was no actual evidence such as a hair follicle test, for instance.

Prior to trial, the defense moved in limine to prevent evidence coming in at trial that the defendant was an off-duty police officer arguing that the prejudice of this evidence outweighs its probative value. The plaintiff argued that this evidence was relevant to damages and proffered testimony from the decedent’s current wife that she was traumatized to learn that the accident was caused by an off-duty police officer that originally fled the scene. The trial court denied the motion in limine and allowed this evidence to come in.

An admission against a party opponent is set forth in Florida Statute s. 90.803(18):

Admissions.—A statement that is offered against a party and is:

(a) The party’s own statement in either an individual or a representative capacity;

(b) A statement of which the party has manifested an adoption or belief in its truth….

An admission, however, does not need to be based on the party’s personal or firsthand knowledge. Jones, supra, at *3 citing Charles W. Ehrhardt, Florida Evidence, s. 803.18 (2014 ed.) (admission against party opponent does not need to be based on firsthand knowledge because when person makes relevant admissions or speaks against their interests it may be assumed they would not do so without an adequate investigation).